Empire Loan To The Sportsmen’s Tennis Club of Dorchester: A $50,000 Thank You! 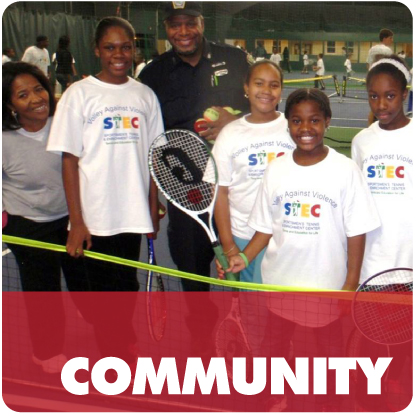 At 950 Blue Hill Avenue, just about halfway between Franklin Park and Mattapan Square, sits a squat, unassuming collection of hangars and outdoor hard-surface tennis courts. Welcome to The Sportsmen’s Tennis Club, a neighborhood sports club with a mission. Established in 1961, it will soon be celebrating its 50th year as the provider of unique athletic and academic programs to kids all across the neighborhoods of Boston and even into the suburbs ringing Greater Boston.
The Sportsmen’s Tennis Club of Dorchester is unique among the many social and community organizations offering “neighborhood services” in that it puts tennis(more on that below) at the epicenter of an original and innovative approach to teaching children and young adults the life, academic, social, and attitudinal skills they need to succeed. For its adult members, it is a beautifully maintained urban oasis in an otherwise
chronically under-developed and under-served part of Boston, namely the Dorchester-Mattapan-Roxbury trio of Boston neighborhoods that are only now just beginning to emerge from the long, hard times of decline and neglect that were characteristic of the “Sixties through the mid-Eighties”. All this for the whopping annual member’s fee of $150.00, which, by the way, only adults pay. “Adults pay so kids can play,” or so one of the operating tenets of the Sportsmen’s Club goes. The annual members’ fees, along with City and State grants, and business sponsorship and private philanthropy, combine to keep the club going strong. thus we have a working, vibrant example of public & private participation and cooperation in maintaining and growing a cherished and valuable team player on the front lines since 1961 of Boston’s efforts to foster neighborhood revitalization, stabilization, and economic development.
All of which has made it a no-brainer for Empire Loan and Michael Goldstein to seek to be a part of the mission. Michael learned of Sportsmen’s Club through his associations (and friendships) with Steve Thompkins, now at the Suffolk County Sherriff’s Office and formerly on the Sportmen’s Board of Directors, and Susanne Thompkins, Director of Development at Boston’s PBS affiliate WBUR.
Indeed, it was pretty much love at first sight. Susanne was aware of Michael’s abiding interest in children’s issues, and Steve, whom Michael stayed in touch with since their respective stints at Emerson College, was well aware of Michael’s What-ifÂ© approach to Empire’s place and role in the community. It was a perfect fit!
This summer The Sportsmen’s Tennis Club hosted a USTA “Sectional,” which enables rising young amateur and professional tennis players from all over the globe to compete and acquire the “points” they need to eventually merit international ranking, and a shot at entering the great and fabled tournaments such as the US Open and the French Open. Empire Loan has donated $50,000.00 to The Sportsmen’s Club to help cover the costs of travel, accommodations, and cash prizes for the participants, who arive in Dorchester from as far-flung shores as Japan and Kenya. The kick-off ceremony merited a visit from His Honor Mayor Menino, a keynote address by Michael, and the week-long event has generated a great deal of positive publicity for the club, and has increased and strengthened the club’s standing within the international tennis community. Perhaps most importantly, it provided an opportunity for local tennis aficionados, particularly the children and adolescents of the club’s youth programs, to witness first-hand some great international youth tennis.
For a complete overview and tour of the good work that the Sportsmen’s Tennis Club has been doing in Dorchester since 1961, by all means visit their website at www.sportsmenstennisclub.org. Empire was particularly taken with the club’s notion that the lessons learned from a study and embrace of the sport, and indeed tennis culture more broadly, can be effectively applied to character building, academic achievement, and positive attitude reinforcement. Not all sports are equally predisposed to address these larger life issues. But tennis, with its emphasis on proper physical form, strategizing on the court, endurance building, game etiquette, and a strict code of conduct vis-Ã -vis one’s colleagues, competitors, coaches, and trainers, is uniquely and ideally suited as a springboard for preparing to tackle the larger challenges of life, as one is about to enter adulthood and engage the world at large. The spectacular track record of the club, and the success stories of the club’s “graduates” manifestly illustrate this point. By making the “genteel” (in the best sense of the word) sport of tennis accessible and affordable to a youth and neighborhood population that, in earlier days, might have been excluded economically and culturally from the enjoyment and appreciation of the sport, Sportsmen’s Tennis Club fits right in with the lineage of social-action movements that go back to (dare we suggest it?) the Victorian Age, with its “activists” championing the values and benefits of hewing to the positive conservative virtues of that bygone era, virtues of hard work, self-restraint, respect for one’s elders and peers, and perhaps most important of all, self-reliance. You will get all of that on the court! These are values that Empire Loan, in its desire to “give back” to the communities and neighborhoods in which it operates will heartily support, and does so in a myriad of ways.