The current health crisis has affected businesses and people around the world and all 8 Empire Loan stores are doing the best they can to cope with the situation and continue to help our customers. Here are a few of the things we are doing at our local pawn shops across New England: All Empire […]

January 18, 2019 By empireloan Comments are Off News & Events

If you’ve been the victim of a theft, here’s what to do

October 13, 2016 By empireloan Comments are Off Blog, Educational, News & Events

Pawn Shops are regulated by local, state and federal laws pertaining to loans, purchases and privacy issues. People often think when their property is stolen they simply go to a pawn shop and see if their merchandise is on display there, but it’s really not that simple. Here’s a description of the process and what […]

Empire Loan in Providence is all about giving back to the community. With two locations in the city, Empire Loan has made commitments to the North Main Street neighborhood where in addition to a beautiful pawn shop we have built Empire Guitars, a true home spun guitar shop. But on Broad Street in Providence is […]

The new Dennis Lehane book, World Gone By, features two characters named after charitable donors. Michael Goldstein, the CEO of Empire loan, gave enough money to charity to be featured in Lehane’s new book. Rather than asking Lehane to use his name, however, Goldstein chose a mention for his wife, Allison Picott. A Read more about the book […]

What does it take to build a massive empire from scratch? You are about to find out! I recently had a sit down with entrepreneur extraordinaire Michael Goldstein. Michael has systematically built his business, Empire Loan, over the past 30 years, and today it is, by far, the most successful pawn brokerage in New England. […]

Empire Loan Stands With the Community

January 15, 2015 By empireloan Comments are Off News & Events

As with many small companies the communities they serve are incredibly important, often the lifeblood of their business. When we saw our neighbors at Building Bridges Through Music were the victims of a tragic robbery, leaving the charity ransacked and out thousands of dollars of equipment, we knew we had to help. With the children […] 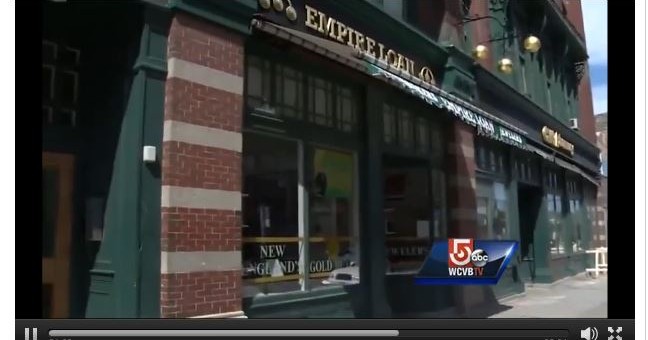 LOWELL, Mass. —Lowell residents are stepping up to help those affected by a devastating fire on Thursday that killed four adults and three children. The tragedy has touched off a donating frenzy across the community. The Wish Project in Lowell has collected five tons of donations in two days. “Many of these families have […]

Our CEO, Michael Goldsteing, reported that Empire Loan will be donating $1000 to victims of the fire in Lowell. We will also match donations dollar for dollar up to $2500. You can see how our community is coming together during tough times in the 7 News story below: 7News Boston WHDH-TV

A process that took Empire Loan all of an hour to execute required several months of back-and-forth planning between the Boston-based pawnbroker and the Lowell Historic Commission. But it all came to fruition on Tuesday morning. “It” represents the installment of what Empire Loan owner Michael Goldstein refers to as the “universal symbol of pawnshops,” […]